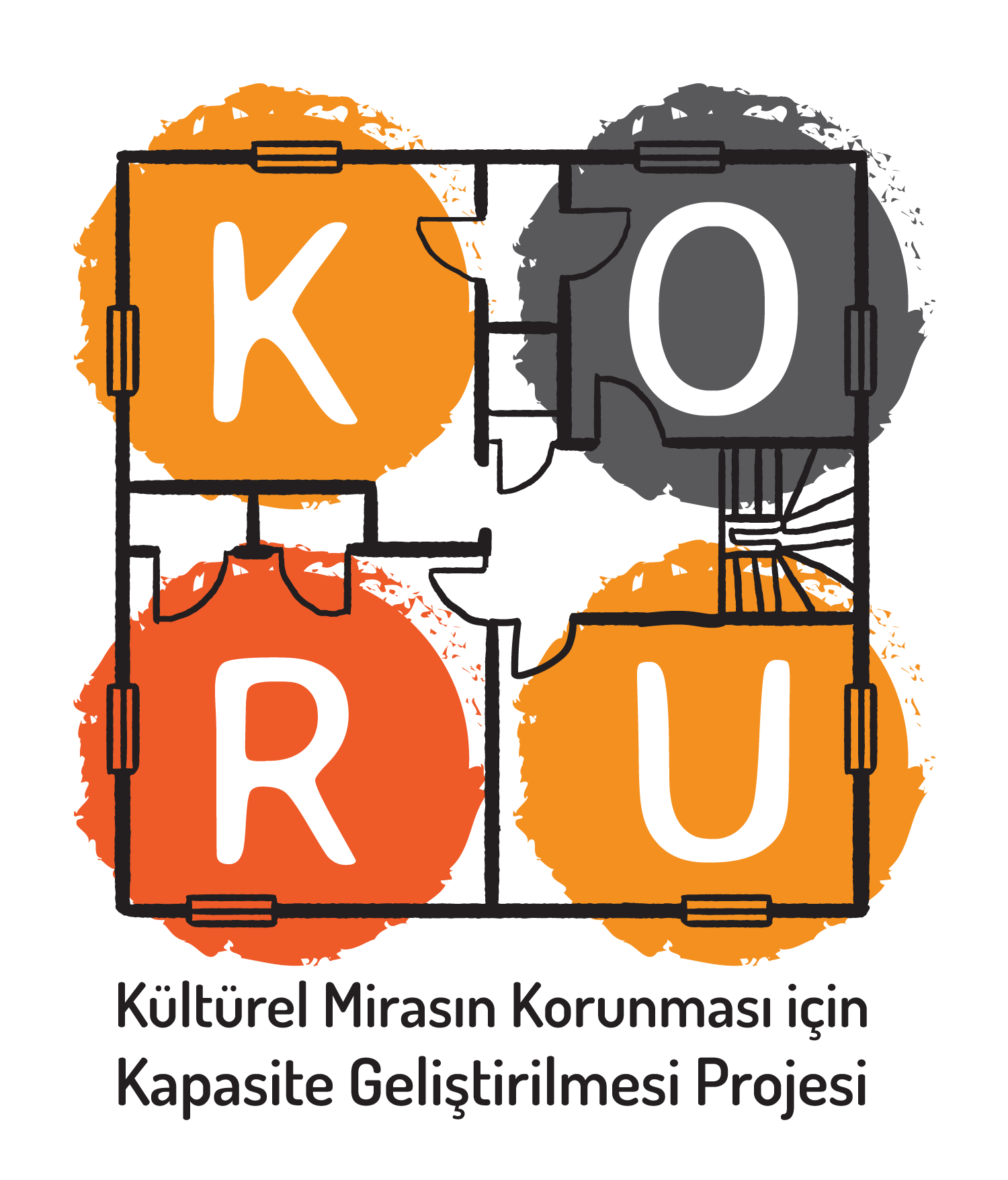 Developing and strengthening the skills, abilities and resources needed in the Turkish cultural heritage sector to adapt, survive and thrive.

Welcome to the KORU project – Turkish for ‘protect’ and also the project’s abbreviation. ‘Kültürel Mirasın Korunmasında Kapasite Geliştirilmesi’ is the official name of the project, which can be translated as ‘Capacity Building in Cultural Heritage Protection.’

Our story takes place within the rich heritage of south-east Anatolia, a vibrant and historic part of Turkey.  Scroll through the exhibition to learn how we delivered a large and widespread training programme, developed a buildings-at-risk register, and saved and restored a traditional house in the city of Mardin. Participants in the KORU project developed and strengthened their skills, instincts and abilities to engage in the protection of their local heritage.

The project was a partnership between Edinburgh World Heritage and the Association for the Protection of Cultural Heritage (KMKD), and funded by the British Council’s Cultural Protection Fund in partnership with the Department for Digital, Culture, Media and Sport.

Edinburgh World Heritage is an independent charity that aims to ensure the city’s World Heritage status is a dynamic force that benefits everyone. Our mission is to connect people to their heritage in everything we do, through the conservation of historic buildings, improving public realm, and engaging people directly with the rich heritage of their city. Our international work enhances this through the exchange of knowledge between experts and collaborators from around the world.

Based in Istanbul, the Association for the Protection of Cultural Heritage (KMKD) takes a stand for cultural heritage created by all communities in Anatolia. In order to reach its goal of safeguarding heritage that is neglected and under risk of destruction, KMKD produces documentation, makes risk assessments and performs the necessary operations for the protection of cultural assets. Through these efforts, it aims to increase recognition and visibility for cultural heritage and attract attention to create public awareness.

Turkey is home to some of the world’s most significant heritage sites. It has 18 sites on the UNESCO World Heritage List and 77 sites on the Tentative List, as well as 18 elements in the UNESCO Intangible Cultural Heritage List. Antakya and Mardin, located in south-east Turkey on the Syrian border, host some of these. With one foot in Europe and one foot in Asia, the country is a multi-layered, multi-cultural focal point of architecture, language, food, and much more besides.

The Turkish cultural sector, after being state-led for many years, is growing to be as rich and diverse as the country’s history with the contributions of civil society organizations and the private sector. The collaborative partnership between Edinburgh World Heritage and KMKD through the KORU project is a perfect example of the success of cultural exchange.

The project took place in the cities of Mardin, Antakya, Istanbul and Edinburgh.

The city of Mardin on Turkey’s southern border rises from the steep slopes overlooking the plains of ancient Mesopotamia. Many houses are dug directly into the rock the city is built on. On a clear day, Syria is visible in the distance.

Mardin is no different to many other historic cities around the world. The houses are old, some are in disrepair, and many are not best equipped for modern living. This has led to much of the local population leaving the historic centre to live in newly-built apartment buildings nearby. The KORU project aimed to help local residents, craftsmen, and heritage professionals engage with their local heritage by providing training on maintenance and repair, heritage management, energy efficiency, traditional skills, and much more besides.

We also found a 200-year-old house in Mardin to repair and restore, to use as a showcase for these conservation skills and, finally, as a training facility so these skills could continue to be shared long into the future. We named the house – the restoration laboratory – Tamirevi, Turkish for ‘repair house.’

What did KORU involve?

The project is made up of four pillars:

buildings surveyed in Mardin and Antakya

The first participants of the project in Mardin were historic house users, tour guides, teachers, and local authority staff in February 2018 who took part in training on topics including basic maintenance, heritage management, and teaching practices. This training was repeated in Antakya a year later with the inclusion of local journalists.

DO enter the work area

The restoration lab summed up the hands-on nature of the project. Upon entering the building site, you would have seen local Mardin stonemasons and carpenters working on various parts of the building, honing their craft and in turn passing on their skills to others through training sessions run throughout the project.

Building sites are often unfriendly, unwelcoming places but this was not the case in the KORU project: a large banner was hung from the side of the building, proclaiming, ‘DO enter the work area’. Members of the public were also invited to tour the site to see work in progress.

The project wasn’t solely focused on past practices, but also how best to look after our heritage for the future. Energy efficiency within historic buildings became an important part of the project. The restoration lab was used to test measures that could improve the efficiency of historic buildings throughout Turkey.

This building provides a base for experts from Turkey and Scotland to pass on their knowledge on building conservation to local stakeholders. By the end of the project, the restoration lab would be transformed into an artist's residency, and an exhibition space showing how the building was restored.

All of the stonemasons and carpenters who worked on the conservation of Tamirevi were trained by Turkish and Scottish experts on conservation best practice, using the building as a training environment.

— Fitting photovoltaic panels, ensuring that they did not impact the silhouette of the city
— Installing an air-sourced heat pump to regulate the temperature within the building
Links:

This approach resulted in

The Orontes River calmly winds through the city of Antakya, home to some of the earliest sites of worship in both Christianity and Islam. This multifaith, multicultural vibrancy lent itself perfectly as the project’s second focus, with cooperation intrinsic to the city. As well as workshops for residents and professionals, a second student summer camp took place within the labyrinthine streets of the old town.

Training activities continued in Istanbul and Edinburgh, where KMKD and EWH are based. Workshops on energy efficiency in historic buildings were held in Istanbul for architects and engineers, as well as trainings where monument keepers learned about managing historical buildings, and tourist guides took part in security trainings. Edinburgh played host to two heritage leadership schools and stonemason trainings, with its longstanding tradition of conservation excellence. This was integral to the Turkish participants’ development by bringing their skills and experiences into a new environment (one with decidedly less sun).

As the project developed, participants were encouraged to pass on their skills to others. Just as the stonemasons working in the restoration lab helped to train apprentices, the project provided several opportunities for capacity building in action. Participants of early trainings took on leadership roles in later trainings. Having excelled at the first summer school, one of the participants, Efecan Tirelioğlu, led on developing the project’s buildings-at risk register.

The project developed a buildings-at-risk register for the historic centres of Mardin and Antakya. This digital database is designed to be used to assist in prioritising restoration work in the cities with scope to easily update and expand in the future.

buildings surveyed in Mardin and Antakya

The Summer Camps Consisted Of

The Heritage Leadership Schools in Edinburgh aimed to further develop KORU participants identified as emerging leaders in the heritage sector. Using Edinburgh as a case study, the week-long training focused on management techniques and case studies.

From the beginning, we wanted the legacy of the project to last well beyond its official end date. The doors of the restoration lab officially opened on 10 October 2019 following eleven months of work. The exhibition, in both Turkish and English, showcases the work that has been done on the building and provides information on how this can be replicated in similar buildings.

The top floor artist residency will inspire and encourage new creativity in Mardin, not least for its breath taking views, as well as ensuring the building remains financially sustainable.

This legacy is continued through the creation of informative publications. Developed and published throughout the project, these documents supplement the core work of the project and provide an accessible and free resource for all to use. From a glossary of architectural preservation terms to a map of local craftspeople in Mardin, they cover a wide range of building conservation topics. You can find a link to these below.

The conservation work sought to maintain the original character of the building while updating it for a new use. The following pictures show the impact we have made, showing views from within the building both before and after the work.

Follow the links below to continue to explore our outputs:

KORU has been an incredible opportunity for cross-cultural learning and pioneering initiatives. Throughout, the project sought to interact with as many people involved with built heritage as possible. To do this, many organisations and professionals from Turkey and Scotland were involved, contributing a significant amount to the project’s success.

Trainers who organised and delivered workshops and lectures

All the participants of the project

If you have any questions regarding the project, please feel free to get in touch using the email addresses below: